Men of the 1st Australian Division of the Australian Imperial Force (AIF) landed under heavy fire at Ari Burnu, later named Anzac Cove, on the Gallipoli Peninsula on the 25th April 1915. The term “an original Anzac” identified those men who participated in the initial landing. During this campaign nine Australian soldiers were awarded the Victoria Cross and Australian casualties incurred were 7,818 killed in action and 19,511 wounded.

There were many intense encounters with the opposing forces, often in close proximity, and heavy casualties incurred. Both the Australian and Ottoman soldiers developed a great respect for their opponents during this campaign. Exchanges of communications and even gifts occurred between the opposing soldiers in the trenches and during ceasefires to tend to the dead and wounded.

The campaign ended on the 20th December 1915 when the last Australians left Gallipoli. 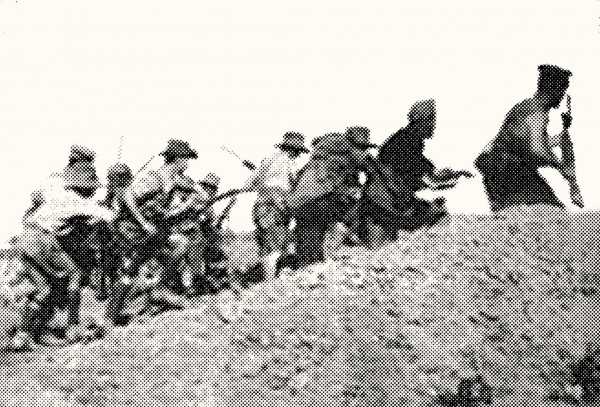 Initially an association of Gallipoli Veterans was formed in Sydney in 1916 by those who had been discharged from the AIF because of wounds received in the Gallipoli campaign. The number of members increased throughout World War I.

This association together with a number of other groups met during the next 17 years. From 1918 there were several attempts to form Gallipoli Associations. None endured until 1934 when, on 6th September, a meeting at the State Shopping Block, Market Street, Sydney resolved to form a ‘legion to perpetuate the comradeship and preserve the spirit of Anzac’. This association became known as the Gallipoli Legion of Anzacs (GLA).

The requisite qualification for membership of GLA was to have served in the British Forces on the Gallipoli Peninsula between April and December 1915.

In the years between World War I and World War II, the GLA leased premises in Sydney near Circular Quay. Eventually at the end of World War II the association was able to buy two adjacent properties: Nos. 12 and 14 Loftus Street. These had been wool stores in the 1890’s and had been separately converted to offices in the 1920’s and 1930’s. The GLA bought the titles under the Real Property Act, connected the buildings to create one floor on each of the first and second floors and opened as the Gallipoli Legion of Anzacs Club.

In the 1960’s, although full membership was still restricted to those with war service in 1915 at Gallipoli, associate members admitted included sons of Anzacs and Returned Servicemen of World War II.

Significance of Gallipoli to Australia and Turkey

The Gallipoli campaign captures a tragedy of epic proportions defined by the unending sadness and loss of so many loved ones. The unwavering defence of the homeland by the Ottoman forces and the tenacity of the Anzac soldiers on the Gallipoli Peninsula demonstrate the special qualities of loyalty, respect, love of country, courage and comradeship that formed an unbreakable bond in the face of incredible hardship and even death.

With the end of World War I, relations between Australia and the Ottoman Empire were quickly normalised. Diplomatic ties were established and access to the Gallipoli Peninsula was given to Australia initially to attend to those killed. Ottoman soldiers during the Gallipoli campaign made significant contributions to the establishment of the Republic of Turkey on the 29th October 1923 with Ataturk becoming the first President.

Of Ataturk’s many famous speeches, in 1934 he paid tribute to the fallen soldiers during the Gallipoli campaign and comfort to their mothers. The memorial at Anzac Cove incorporates an extract from this speech:

Those heroes that shed their blood and lost their lives…

You are now lying in the soil of a friendly country. Therefore rest in peace. There is no difference between the Johnnies and the Mehmets to us where they lie side by side here in this country of ours.

You, the mothers, who sent their sons from far away countries wipe away your tears; your sons are now lying in our bosom and are in peace, after having lost their lives on this land they have become our sons as well.

Australia and Turkey have developed mature ties in the ensuing decades. The centenary commemorative activities being planned for 2015 will provide opportunities to cherish and sustain the memory of the conflict and to establish goals for the future relationship of the two countries based on the sound foundations bequeathed to us by those heroes in 1915.

A change to the regulatory requirements for licensed clubs in the 1970’s led to the formation of The Gallipoli Memorial Club Limited on the 5th September 1972 to take over the GLA property and to perpetuate the ideals of the Gallipoli Anzacs.

Successively, building alterations to improve the Club have been undertaken and the eligibility for membership widened. With WW I and WW II returned servicemen numbers dwindling, the Club accepted servicemen, servicewomen and citizens in general who subscribe to the Club’s Creed.

That within the community there exists an obligation for all to preserve the special qualities of loyalty, respect, love of country, courage and comradeship which were personified by the heroes of the Gallipoli Campaign and bequeathed to all humanity as a foundation of perpetual peace and universal freedom.

The Club has an elected board of nine directors of which four members comprise the Executive Committee. The Club’s day to day operations are overseen by the Secretary/Manager Mr John Robertson.

Gallipoli Memorial Club Board of Directors